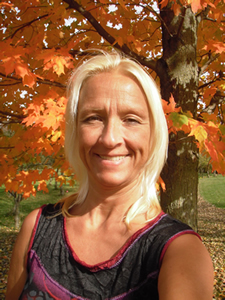 Jane Stark is an osteopathic manual practitioner with 16 years of osteopathic experience and 28 years as a certified athletic therapist. Jane is also a registered kinesiolgist. Jane is equally skilled at treating complicated chronic conditions and acute sports- or activity-related injuries. Jane’s approach is unique: she not only treats the obvious presenting conditions, but she has an intuitive sense of what the body needs, helping her find and treat the root cause of the presenting issue. As a result, many of her clients report that she can help people who have tried everything else and simply are not getting the results they want and need.

Jane graduated from the Canadian College of Osteopathy in Toronto, where she is now an instructor, the director of student research and the college's continuing education program. Jane is also a faculty member of the Collège D’Études Ostéopathiques de Montréal at the campuses in Halifax and Vancouver. Outside of teaching, Jane is known as an authoritative osteopathic historian, with several publications on the subject, the most recognized being Still’s Fascia. In addition to being an authority on history, she lectures internationally on the subject of connective tissue as it relates to osteopathic treatment.

Jane was formerly on the board of directors of the World Osteopathic Health Organization (2009-2011), and she recently completed a master’s degree in clinical research administration. Jane practices on a freelance basis in 12 different countries, including Japan, the United States, and throughout Europe. This academic year, she will be featured at conferences or courses in Kobe Japan, Madrid, Porto, Munster, Munich, Berlin and Bad Nauheim Germany, Warsaw Poland, and Aldeneik Beligium.

In her capacity as an athletic therapist, Jane spent a decade at the University of Toronto’s David L. MacIntosh Sport Medicine Clinic. In addition, she has worked at a number of major athletic games, including the Commonwealth Games of 1998, the ParaOlympics in 1996, and the Canada Games in 1991. She was also the head athletic therapist for Canada’s National Men’s Rugby Team from 1992 to 1995.